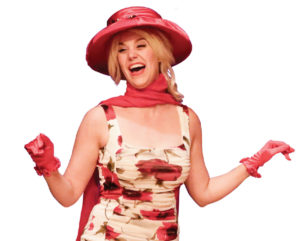 We are thrilled to announce our 72nd Season of live theatre — our 2nd Season as SLO REP! The upcoming season of six Mainstage Season Subscription shows features four Tony Award-winners, one Pulitzer Prize winner and two of the most widely-acclaimed plays in theatre history.  We’ve also got a fabulous, smash-hit Gala Musical that is currently one of the most popular shows in America, two ACT family shows, six challenging, cutting-edge Ubu’s Other Shoe Staged Readings and more!

A Funny Thing Happened on the Way to the Forum

One of the most famous and revered plays of modern theatre.
“In memory, everything seems to happen to music.” — Tennessee Williams

Winner of the 2005 Pulitzer Prize and Tony Award.
“An eloquent and provocative investigation of truth and consequences. A gripping mystery, tightly written.” —Time-Out NY

Written in 1941, Blithe Spirit was the first production staged by the San Luis Obispo Little Theatre in 1948.
“Classic comedy…can still keep an audience in a state of tickled contentment” — NY Times

June 7-30, 2019
Music and Lyrics by Jerry Herman
Book by Michael Stewart
Based on The Matchmaker by Thornton Wilder

Winner of the 1964 Tony Award for Best Musical, Best Book of a Musical and Best Original Score.
“Money, pardon the expression, is like manure. It’s not worth a thing unless it’s spread around, encouraging young things to grow.” — Dolly Levi

This season’s “biggest show of the year” will be the biggest in our history! A “Million Dollar Musical!”
“Million Dollar Quartet is a blast!” — Chicago Tribune

The smash-hit musical is inspired by the recording session that brought together rock ‘n’ roll icons Elvis Presley, Johnny Cash, Jerry Lee Lewis, and Carl Perkins for the first and only time. On December 4, 1956, the famous four gathered at Sun Records in Memphis for what would be one of the greatest jam sessions ever. In this blockbuster musical experience, the actors play the instruments, sing the songs and take on the character of the four icons of popular music. Featuring such songs as “Blue Suede Shoes,” “Great Balls of Fire,” “Walk the Line,” “Whole Lotta Shakin’ Goin’ On,” and more, this thrilling musical brings you inside the recording studio for one unforgettable music-making night.

December 1-23, 2018
Based on the motion picture
Written by Philip Grecian
Based upon the book by Jean Shepherd

Back by popular demand for the sixth year, A Christmas Story takes the stage again for a fun, festive holiday treat!

“A delightfully thorny account of working as a Yuletide elf at Macy’s. Priceless observations, both outrageous and subtle.” —NY Times

(Auditions for young performers will be held April 10 and 11. Click HERE for more information.)