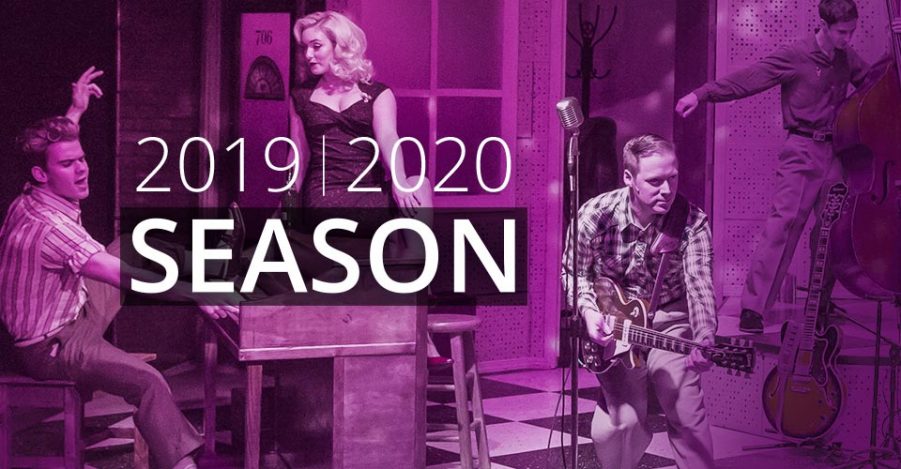 We are thrilled to announce our 2019-2020 Season! Mark your calendars now with these “on sale” dates and be sure to renew your season subscription early to ensure the best seats! See below for a complete list of shows and descriptions!

Interested in supporting the magic of live theatre by becoming a Show Sponsor? Just a few sponsor opportunities remain to be filled! Please contact Patty Thayer for details.

“The audience all but exploded the theatre with laughter.” —New York Post

“Hilarious, a tribute to the art of acting.” —Washington Post

The long-running Off Broadway hit features two actors creating the entire population of Tuna, Texas in a tour de farce of quick change artistry, changing costumes and characterizations faster than a jack rabbit runs from a coyote. Two actors, 20 characters, and a barrel of laughs, y’all.

“Try To Remember” a time when this romantic charmer wasn’t enchanting audiences around the world. The Fantasticks is the longest-running musical in the world and with good reason: at the heart of its breathtaking poetry and subtle theatrical sophistication is a purity and simplicity that transcends cultural barriers. The result is a timeless fable of love that manages to be nostalgic and universal at the same time. Featuring the beautiful songs that have become classics of American musical theatre, such as Soon It’s Gonna Rain, I Can See It, They Were You, Round and Round and of course, Try to Remember.

“It is a classic thriller, a genre with a style, a manner and an audience of its own. If you like thrillers, do see it. I promise you that it is vintage.” —NY Post.

One of the great popular successes in Broadway history, this ingeniously constructed play offers a rare and skillful blending of two priceless theatrical ingredients: gasp-inducing thrills and spontaneous laughter. Dealing with the devious machinations of a writer of thrillers whose recent offerings have been flops, and who is prepared to go to any lengths to improve his fortunes, DEATHTRAP provides twists and turns and sudden shocks in such abundance that audiences will be held spellbound until the very last moment.

You’re seven years old. Mom’s in the hospital. Dad says she’s “done something stupid.” She finds it hard to be happy. So you start to make a list of everything that’s brilliant about the world. Everything worth living for: 1. Ice cream. 2. Kung Fu movies. 3. Staying up past your bedtime and being allowed to watch TV. 4. The color yellow. You leave it on her pillow. You know she read it because she’s corrected your spelling. Soon, the list will take on a life of its own. A play about depression and the lengths we will go to for those we love. What’s on your list?

By Moisés Kaufman and Members of the Tectonic Theater Project
MAY 1-17, 2020

“A pioneering work of theatrical reportage and a powerful stage event.” —Time Magazine

“There emerges a mosaic as moving and important as any you will see on the walls of the churches of the world…nothing short of stunning…you will be held in rapt attention.” —New York Magazine.

In October 1998, a 21-year-old student at the University of Wyoming was kidnapped, severely beaten, and left tied to a fence in the middle of the prairie outside Laramie, Wyoming. His bloody, bruised, and battered body was not discovered until the next day, and he died several days later in an area hospital. His name was Matthew Shepard, and he was the victim of this assault because he was gay. Moisés Kaufman and fellow members of the Tectonic Theater Project made six trips to Laramie over the course of a year and a half, in the aftermath of the beating and during the trial of the two young men accused of killing Shepard. They conducted more than 200 interviews with the people of the town. Some people interviewed were directly connected to the case, while others were citizens of Laramie, and the breadth of the reactions to the crime is fascinating. Kaufman and Tectonic Theater members constructed a deeply moving theatrical experience from these interviews and their own experiences in Laramie. Commemorating its 20th year in 2020, THE LARAMIE PROJECT is a breathtaking collage that explores the depths to which humanity can sink and the heights of compassion of which we are capable.

It is the 1958 Springfield High School senior prom, and four teenage girls who are the school’s “trophy-winning” song leaders are asked to step in as the entertainment. They are replacing the boys’ glee club, the Crooning Crab Cakes, whose lead singer was caught smoking behind the girls’ locker room and suspended from school. The Marvelous Wonderettes take the stage and win our hearts. From prom night to their 10 year reunion, the girls perform such classic hits as It’s My Party, Mr. Sandman, Lollipop, Son of a Preacher Man, Leader of the Pack, Dream Lover, Hold Me, Thrill Me, Kiss Me, You Don’t Own Me, RESPECT, Rescue Me and more! This musical trip down memory lane will be the marvelous season finale for our 2019-2020 Season!

Always…Patsy Cline is a delightful musical about friendship, country music and a brilliant artist who left us all too soon. One of the most produced musicals in America, the show has enjoyed great success all over the United States, Canada, the UK and Australia, including a successful run off-Broadway. Always…Patsy Cline is more than a tribute to the legendary country singer who died tragically at age 30 in a plane crash in 1963.  The show is based on a true story about Cline’s friendship with a fan from Houston named Louise Seger, who befriended the star in a Texas honky-tonk in 1961, and continued a correspondence with Cline until her death.

The musical play, complete with down home country humor, poignant tales of life on the road and even some audience participation, includes many of Patsy’s unforgettable hits such as Crazy, I Fall to Pieces, Sweet Dreams and Walking After Midnight…27 songs in all.  The show’s title was inspired by Cline’s letters to Seger, which were consistently signed “Love ALWAYS… Patsy Cline.”

“The seaweed is always greener in somebody else’s lake.”  – Sebastian, The Little Mermaid

In a magical underwater kingdom, the beautiful young mermaid, Ariel, longs to leave her ocean home – and her fins – behind and live in the world above. But first, she’ll have to defy her father, King Triton, make a deal with the evil sea witch, Ursula, and convince the handsome Prince Eric that she’s the girl whose enchanting voice he’s been seeking.

Performed by the talented young actors of the Academy of Creative Theatre.

Our young performers of ACT take on the challenge of “The Scottish Play” and bring this classic story to life.

Returning home from battle, the victorious Macbeth meets three witches on the heath. Driven by their disturbing prophecies, he sets out on the path to murder. This script was originally developed for the Seattle Children’s Theatre Summer Season, an acclaimed program in which student actors and theatre professionals come together to produce polished plays. This edited version of MacBeth has been specifically written for students in grades 4 through 12.

A play in 2 acts written by Philip Grecian
Based on the Warner Bros. motion picture and on the book “In God We Trust, All Others Pay Cash” by Jean Shepherd
December 6-22, 2019

“A Christmas Story is a Christmas MUST.” —Orlando Sentinel

Back by popular demand for the sixth holiday in a row!

Jean Shepherd’s memoir of growing up in the midwest in the 1940s follows 9-year-old Ralphie Parker in his quest to get a genuine Red Ryder BB gun under the tree for Christmas. Ralphie pleads his case before his mother, his teacher and even Santa Claus himself, at Higbee’s Department Store. The consistent response: “You’ll shoot your eye out!” Bring the whole family to A Christmas Story for a heartwarming, funny, nostalgic holiday treat!

by Stephen Karam
AUGUST 30-31, 2019
“THE HUMANS is a major discovery, a play as empathetic as it is clear-minded, as entertaining as it is honest.”—NY Times

How to Transcend a Happy Marriage

by Wallace Shawn
MARCH 13-14, 2020
“Essential, Illuminating, and Not-To-Be-Missed! The Designated Mourner makes the definitive case for Wallace Shawn as one of the most complex and uncompromising moralists of the American theater. ” —NY Times

by Annie Washburn
APRIL 17-18, 2020
“When was the last time you met a new play that was so smart it made your head spin?… Anne Washburn’s downright brilliant “Mr. Burns, a Post-Electric Play” has arrived to leave you dizzy with the scope and dazzle of its ideas.” – NY Times

Don’t miss a minute of this incredible new season! Subscribe early for the best seats!

Please note: Dates and shows are subject to change. Life is full of surprises.