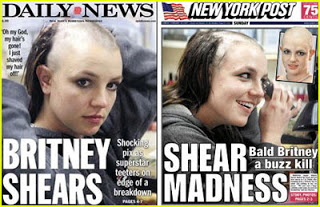 Last night I stumbled upon a youtube clip that I hadn’t seen in a couple years. Think back to the fall of 2006. The biggest new event (sadly) at that time:

Thankfully, the News and the Post were tastefully on it.
Britney, after spending only 24 hours in rehab had walked out, shaved her head, and attacked a car with an umbrella. Shortly afterward, the authorities would arrive at her house to take her children while she locked herself in the bathroom. The country found itself unified by the most unlikely and unexpected of emotions: empathy for Kevin Federline. 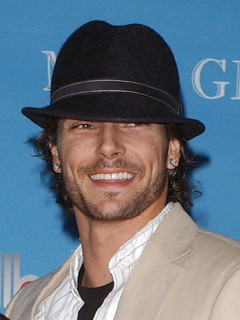 I’m the sane one, bro.
Naturally, Britney’s meltdown was fodder for all aspects of the media: CNN even instituted a “Britney Watch” as if she were ostrich about to give birth to a dolphin.
On February 20, 2007 Craig Ferguson delivered the following monologue on his Late Late Show. It serves as a great reminder that artists, at any moment, have the ability to transcend the inherent limitations of their medium. Ferguson puts his wise-cracking gay robot sidekick aside and explores his own past, his thoughts on Britney, and our own fascination with public humiliation.
Click HERE to watch Ferguson get serious. While still being funny.
Have a great Thursday, everyone,
-Kevin
All Events