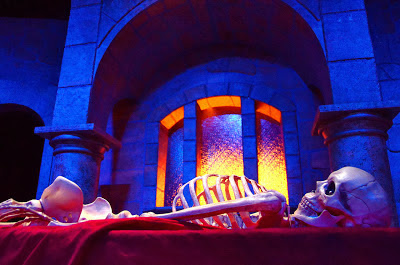 In INCORRUPTIBLE one of the major “characters” in the play is Sainte Foy, pictured above. That’s right, the bones of Sainte Foy are an important plot point (if not a living, breathing person) in this hilarious comedy now playing at the Little Theatre.
But did you know there was a real Ste. Foy?

In the early days of Christianity, there was a wide trade in relics, “incorruptible” bodies or skeletal bits and pieces of dead martyrs and saints. They were enshrined by towns and churches and purchased by well-to-do individuals. Michael Hollinger (the playwright) actually took his inspiration for the play from an actual feud between two rival French monasteries. A monk from Conques stole the bones of Ste. Foy from a church in Agen in the 9th century.

Sainte Foy, also known as Fides or Faith, was a 12-year-old girl of Gaul (now France) who was beheaded by the Romans in 303 A.D. for refusing to renounce her faith. Today (thanks to an enterprising monk in the 9th century!) her relics are kept at the Abbey Church of Sainte-Foye in Conques, France. 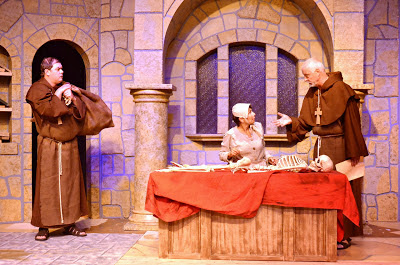 In the play, payment is demanded from a woman (Rosh Wright) who comes to pray to the relics of Ste. Foy and of course, much comedy ensues. But legends portray the real Ste. Foy as a patron who could turn against those who only gave small donations to her church at Conques. Really. She also has an interesting sense of humor. You can read more about Ste. Foy HERE (look under “Legends.”) So, when you come to see INCORRUPTIBLE this weekend (and I really hope you will!) you now know the story behind the story. And even though this delightful farce of a play will leave you smiling, there’s a little bit of truth in it as well. There always is in the best of theatre. 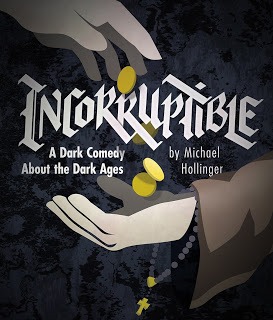 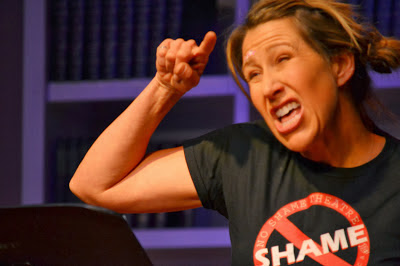 It’s the last Friday of the month and you know what that means… it’s time for No Shame!
FRIDAY, SEPTEMBER 27
Doors & Bar open at 9:30 pm
Script Submissions at 10pm
Performances at 10:30pm!
FREE!!
Don’t miss the most exciting evening of live theatre you’ll see this month! For more information about No Shame, click HERE.
COMING NEXT WEEK! 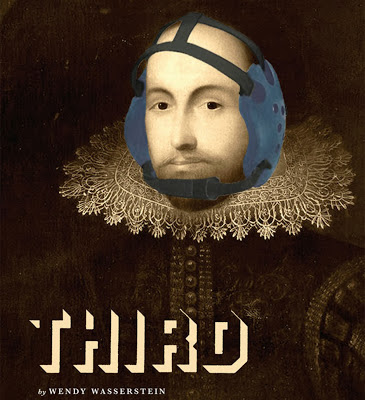 An Ubu’s Other Shoe Staged Reading
Directed by Kerry Mayling
TWO NIGHTS ONLY!
FRIDAY, OCTOBER 4 ~ 7PM
SATURDAY, OCTOBER 5 ~ 7PM
Join us for a talk-back after Friday’s performance
A timely and funny play, THIRD tells the story of college professor Laurie Jameson, whose seemingly well-ordered life as wife, mother and daughter is thrown into disarray when she accuses a student, an outwardly stereotypical jock nicknamed ‘Third,’ of plagiarism. In challenging the student, she is forced to question her aggressively feminist ideology, standards and family relationships, bringing the play’s central theme — the danger of becoming that very thing you have been battling against — full circle. Defined by its dazzlingly smart dialogue, crackling wit, intelligence and wryness, THIRD is true evidence of what made the late Wendy Wasserstein one of the most prominent female playwrights of the last 20 years.
CLICK HERE FOR INFO & TICKETS
Thanks to Ubu’s Other Shoe Season Sponsors 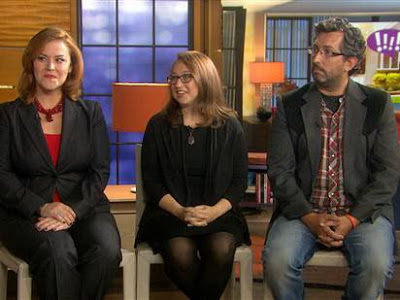 David Vienna, talented writer and playwright (This is Rock ‘n Roll, My Generation, Watergate) and friend of the Little Theatre, appeared on the Today Show yesterday! David is the author of the popular blog The Daddy Complex and you can see his Today Show appearance right HERE and read a follow-up story in The Huffington Post right HERE. Way to go, David! 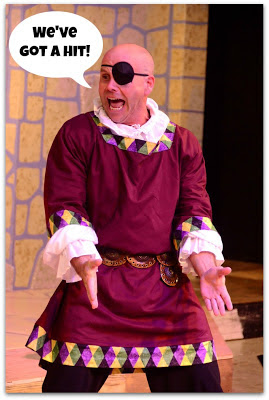 So, it’s almost time for another weekend at the Little Theatre! It’s your last chance to see INCORRUPTIBLE, so be sure to get your tickets right HERE and right NOW to be sure you don’t miss out on our uproarious comedy hit!
There’s really nothing like live theatre, absolutely nothing.
See you soon!
~Patty
All Events