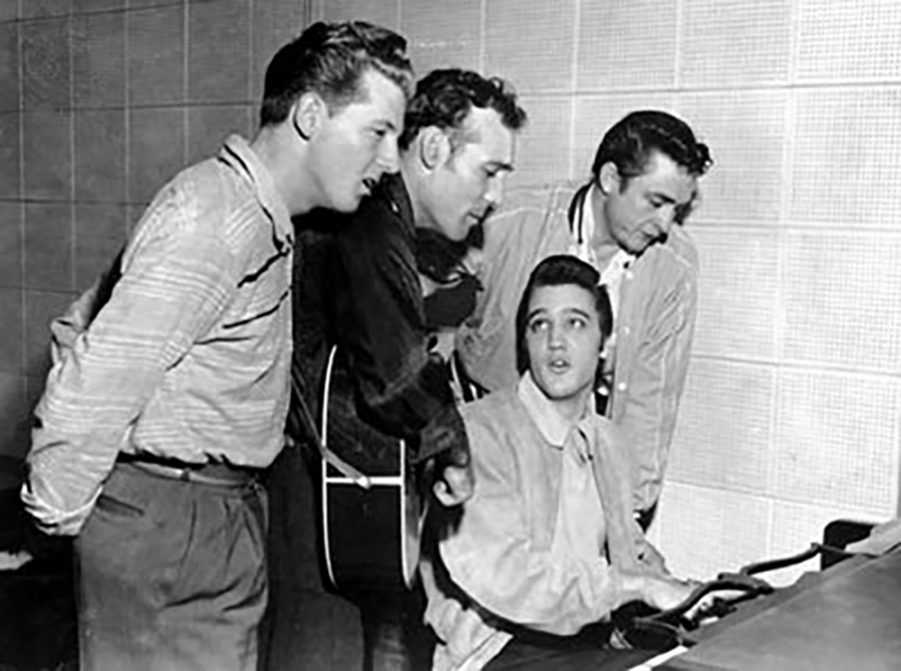 On February 8th, SLO REP will bring together a brilliant cast to re-create that history. Our four leading cast members not only take on the characters, they play the instruments and sing the songs of those four icons of popular music. If you’d like to learn more about that fateful night in 1956 and our production of this hit rock ‘n roll musical, read on!

Carl Perkins will be played by Christopher Wren, who is also the show’s musical director. Chris is an accomplished actor and musician, a 2008 graduate from the American Musical and Dramatic Academy in New York City where he has lived since 2006. He is also a professionally trained saxophonist, guitarist, drummer, harmonica player, puppeteer and touring stand-up comedian.

Jerry Lee Lewis will be played by Jared Freiburg, an actor who has brought Lewis to life in several productions across the country. His appearance at the Oregon Cabaret Theatre inspired this review: “Freiburg… is a stunningly talented pianist…beating the upright piano on which he plays as though it owes him money, Freiburg uses hands and feet, head and tail to assault the poor instrument again and again as he pirouettes through a morass of high-energy numbers like a premier danseur.”

Elvis Presley will be played by Sam C. Jones, who has been chasing his dream of being a rockstar since he was a kid, and has no plans of stopping. While Sam is usually onstage as an actor-musician, he has also found a home in Shakespeare, opera, and as a singer-songwriter as well.

Johnny Cash will be portrayed by an actor known only as Cole, who is the youngest artist ever inducted into the Rockabilly Hall of Fame and has spent the last year traveling around the country playing the infamous “man in black” in various regional productions of Million Dollar Quartet.

Also joining the cast will be local actor Ben Abbott, playing Sam Phillips. Ben was most recently seen onstage at the Great American Melodrama in The Holiday Extravaganza and was last seen on the SLO REP stage portraying Daddy Warbucks in Annie. The character of Dyanne, Elvis’s girlfriend, will be played by Abbey Campbell, a professional actress and singer originally from Sacramento.  Rounding out our “Million Dollar Band” are local musicians Evan Goldhahn and James Gallardo.

Million Dollar Quartet will be directed and choreographed by Michael Jenkinson. Michael directed last season’s The All Night Strut and is well-known for his work at PCPA—Pacific Conservatory Theatre.

Elvis Presley, Johnny Cash, Jerry Lee Lewis and Carl Perkins, the four great stars of Memphis’ legendary Sun Records, all in one room together. That’s the premise on which the new Million Dollar Quartet is built. It’s a great story, and I won’t try to recap it all here, but if you’d like to learn more about the true story behind that incredible night as well as how the musical came together, click HERE to read the story in Playbill from 2010, when Million Dollar Quartet opened on Broadway. You can also check it out on Wikipedia – always a go-to for a little history!

And after you’re finished reading about it, be sure to BUY YOUR TICKETS TODAY! We open this show on February 8th and if you blink twice after that, we’ll be SOLD OUT!