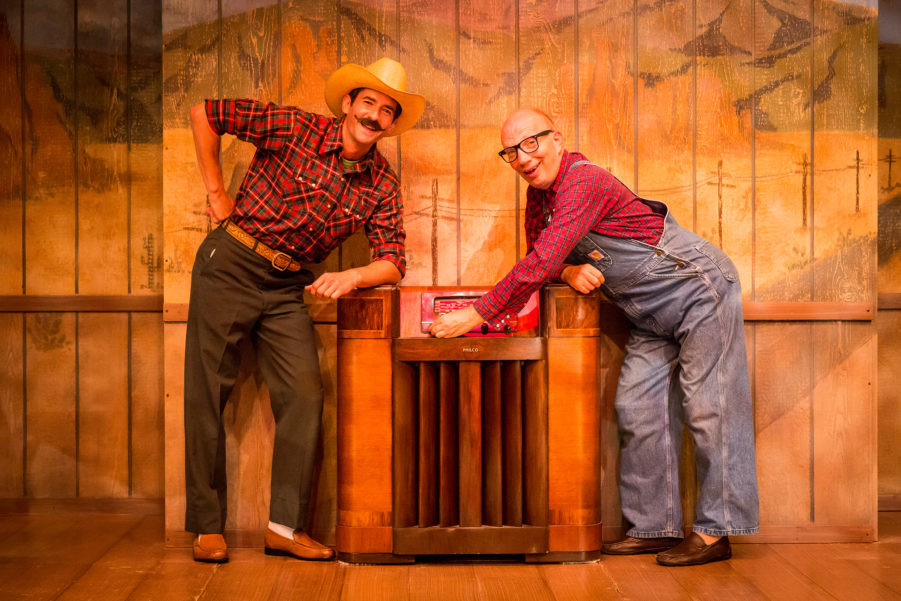 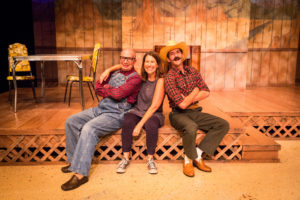 It’s opening night! And what better way to celebrate than to read all about this 1981 comedy that’s been going strong for over 30 years? Suzy Newman has directed our production, which features two of our favorite Central Coast actors: Billy Breed and Jeff Salsbury. Let’s kick this off by hearing Suzy’s thoughts on the play and this production, then we’ll learn a little about how it all started and get to know the authors and original actors.

I first saw Greater Tuna many years ago, on a bootleg VHS of the original production, performed by the playwrights. I was in graduate school studying acting in Tuscaloosa, Alabama and I can say, without reservation, that even my Chekov performances got better after that. Joe Sears and Jaston Williams showed me how to be bold, meticulous, ridiculous, rude, attentive, fearless, truthful and unapologetically funny and theatrical.  (I’ve watched it – and my favorite of theirs, A Tuna Christmas – dozens of times over the years.  And I did finally order an official DVD from them.)

Their content was also bold; they took ludicrous people from their hidey holes, shoved them onto the stage and openly laughed at them. (Twenty years ago, I thought those people were anomalies. I will admit to being naïve.) Their writing comes from an intimate knowledge of people like the residents of Tuna. Reviewers like to call Greater Tuna a “love letter to small town Texas.”  Maybe so, but I think it’s more a love letter to theatre – the place that they could literally show us how all these people looked to them. 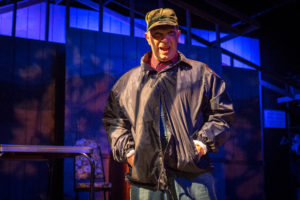 In 1981, it may have seemed that Greater Tuna was equating small towns with small minds. We could maybe laugh a little more readily knowing that these were folks we didn’t need to worry about in our own circles. They were the relative who was stuck in the past – the one you only had to see at Thanksgiving.  But those relatives should be gone by now and here I am writing this, two weeks into rehearsal, and some people are continuing to lose their minds because a young actress was cast as a character that was originally a drawing. I recently read a bumper sticker in downtown SLO that is worthy of Tuna’s Vera Carp. Our own POTUS has just muttered the last line of the play almost verbatim. And coming from his mouth, it was decidedly not funny. 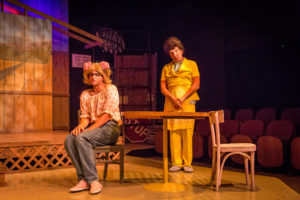 But that’s why Greater Tuna is in front of you now. In spite of the glorious onstage antics, and the conspicuous invitation to laugh, the playwrights don’t make it easy for us. The confusion generated by good satire starts the conversation: Is she a sweet little old lady or a psychopath?  Was listening to the news this morning hilarious or depressing? Does Jeff look better in a dress, or is it Billy?

The real Tuna, Texas doesn’t exist anymore, but its people sure do. And what is said over a 275 watt radio station can now easily be spread worldwide. Greater Tuna asks us to meet our own “small town folk” and after all these years, tells us that we need to learn how to live next door to them. 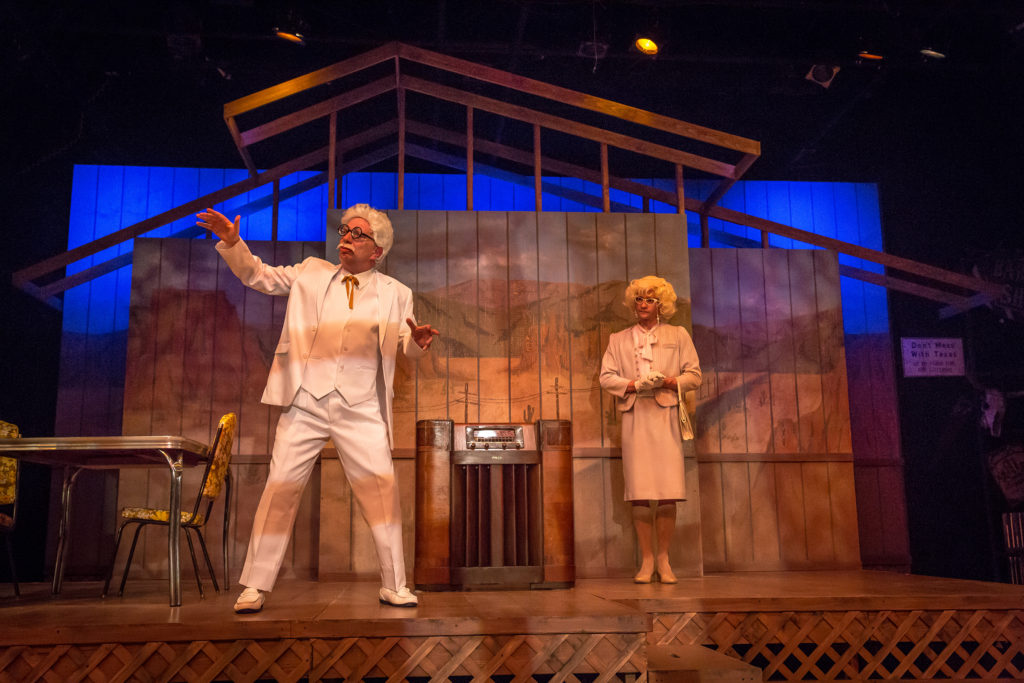 “Texas’ third smallest town, where the Lion’s Club is too liberal and Patsy Cline never dies.” 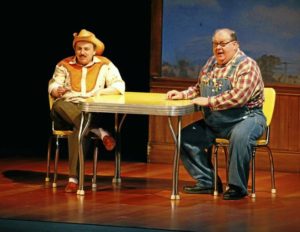 Greater Tuna started as a skit done at a party in reaction to a political cartoon.  Joe Sears, Jaston Williams and Ed Howard parlayed some characters into a series of sketches, a full length play, and then a virtual franchise. The original production began in Austin, Texas in 1981, and the next year began an Off-Broadway run at Circle in the Square. By 1985, Greater Tuna was the most produced play in the country. It was an HBO special produced by Norman Lear (where all the characters were seen at the same time!), and in 1990 Sears and Williams performed at the White House for President George H. W. and Barbara Bush. After years of touring Greater Tuna, the team wrote A Tuna Christmas which, in 1995, earned Sears a Tony Nomination. Red, White and Tuna and Tuna Does Vegas followed and were toured by Sears and Williams into 2010.

In case you were wondering, Tuna was a real place: a community built up around a railroad stop in south Texas.  “Tuna was shown on some maps of La Salle County at late as 1965.” 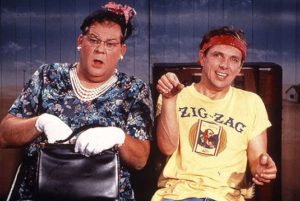 Ed Howard is the co-author of the plays Greater Tuna, A Tuna Christmas, Red, White and Tuna and Tuna Does Vegas.  He also co-authored Splendora based on the novel by Edward Swift, and the book and lyrics of the musicals The Body Snatchers and Boy Problems.  Other works include The Summer of Daisy Fay and The Glory Getter, both based on DAISY FAY AND THE MIRACLE MAN, the first novel by Fanny Flagg; Hamlet, Texas, a modern day retelling of Shakespeare’s Hamlet set in West Texas on the ranch of an oil tycoon; and book and lyrics for The Tempest Tossed, a musical comedy spoof of the The Tempest featuring Shakespeare and the Muses. The Tuna Trilogy plays were awarded the Los Angeles Dramalogue award, the San Francisco Bay Area Critics Award, and received Helen Hayes Award nominations.  After its critically acclaimed Broadway début, A Tuna Christmas was published in Best Plays of 1995 and garnered for Mr. Sears a Tony nomination. 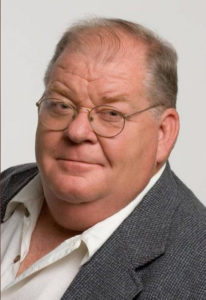 Joe Sears is co-author and co-star of Greater Tuna and the wildly successful Tuna Trilogy. Mr. Sears has toured extensively with Tuna Trilogy productions since 1982. His sixth tour of A Tuna Christmas included his Broadway debut for which he received a 1995 Tony Award-nomination for Best Actor in a Play. He originated Greater Tuna off-Broadway when the show premiered in 1982 and has performed in the highly successful national tours and starred in the Norman Lear Special of Greater Tuna which aired on HBO. Mr. Sears has been acting professionally for more than 30 years. He received the 1993 Los Angeles Dramalogue Award for Best Actor in A Tuna Christmas. He performed in the musical comedy The Fantasticks at Ford’s Theatre in Washington, DC and at Casa Mañana Theatre in Fort Worth. He made his movie debut with Tommy Lee Jones and Matt Damon in The Good Old Boys. Mr. Sears also owns and operates Cody Stage, a summer stock theatre company in Cody, WY. 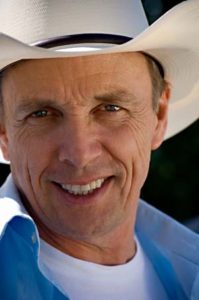 Jaston Williams is co-author and co-star of Greater Tuna and the wildly successful Tuna Trilogy. Mr. Williams has been creating the citizens of Tuna since 1982. He has received Washington DC’s Helen Hayes Award nominations for A Tuna Christmas and Red, White and Tuna as well as the San Francisco Bay Area Critics Award for Greater Tuna. Mr. Williams received the L.A. Dramalogue Award for both Greater Tuna and A Tuna Christmas and the Texas Governor’s Award for Outstanding Contribution to the Arts by a Native. In his hometown of Austin, Texas, his acting credits are extensive, most recently appearing at Zachary Scott Theatre in The Laramie Project. He work-shopped his autobiographical one-man show I’m Not Lying to critical acclaim at Austin’s State Theatre of Texas and returned it there for a full production in February of 2004 as well as a benefit performance at Washington DC’s Kennedy Center. His latest autobiographical play Cowboy Noises premiered in Austin in February 2008 to critical acclaim.

So, here we are. 2019 and SLO REP is kicking off our 2019-2020 Season with GREATER TUNA! Homespun Texas comedy with an edge of painful reality tossed in, just so you remember that we’re all human and we ain’t perfect. And some of these folks from Tuna are a little less perfect than your average cowboy. The best comedy is always true so get ready folks. Fasten your seat belts, hitch up your britches, pull up your pantyhose and straighten your hat. SLO REP, Billy Breed and Jeff Salsbury are takin’ on the citizens of Tuna, Texas.

Wait!  Just one more thing. There are only two actors in this show and they are going to slip in and out of 20 different characters. That takes a good bit of acting skill and a couple of helpers backstage to make sure everything is zipped and unzipped, stuck and un-stuck, tucked in and straightened up! Thank you to Christine Miller and Victoria Connerley for keeping our boys in costume and out! Phew! 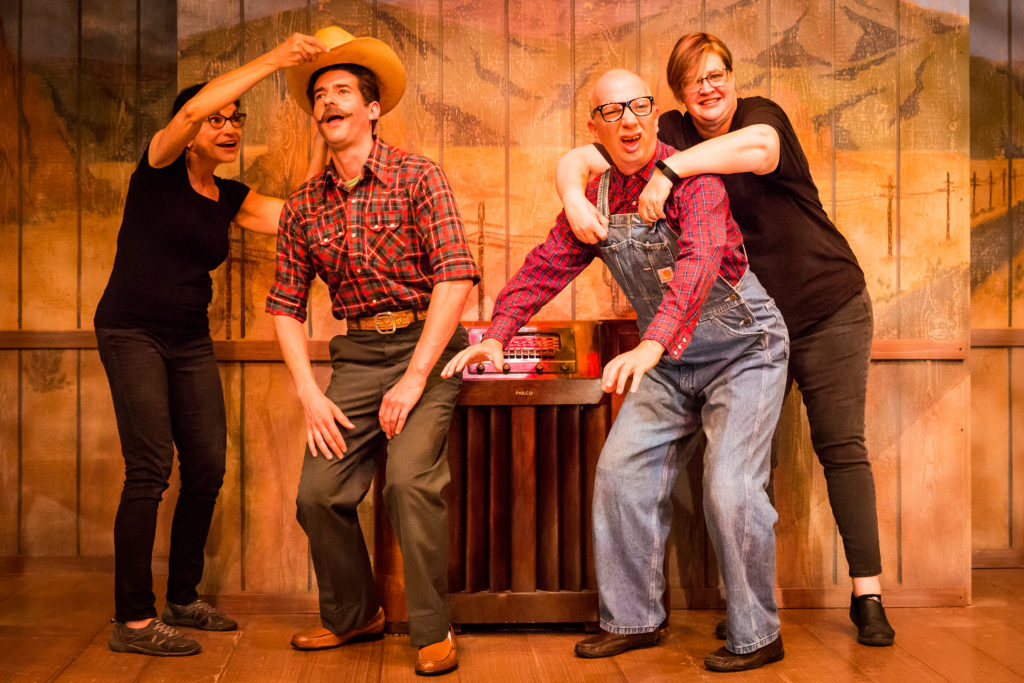