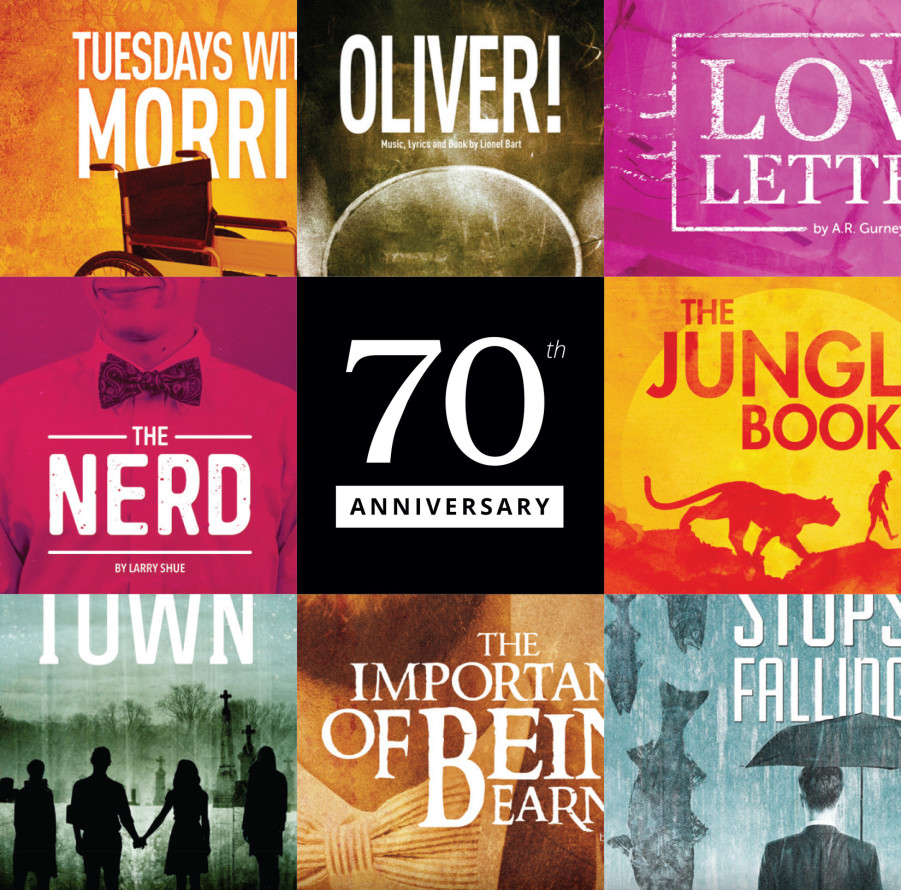 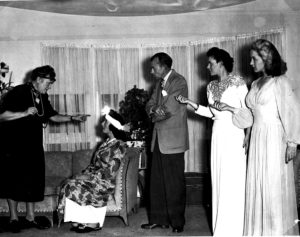 In 1947, seven plucky actors – all volunteers – rented a hall to put on a play in San Luis Obispo. They didn’t know if anyone would come, but when the curtain rose that night, there was an audience. And when the curtain fell, applause filled the hall. No one dreamed that such a small beginning would lead to more than 900 productions staged by the Little Theatre over the past seven decades. Those 900 shows would not have been possible without the help of thousands of volunteers with a passion for theatre. This past Sunday we celebrated a few of our awesome volunteers from the 2015-2016 Season and enjoyed a preview of what’s coming up in our landmark 70th year! 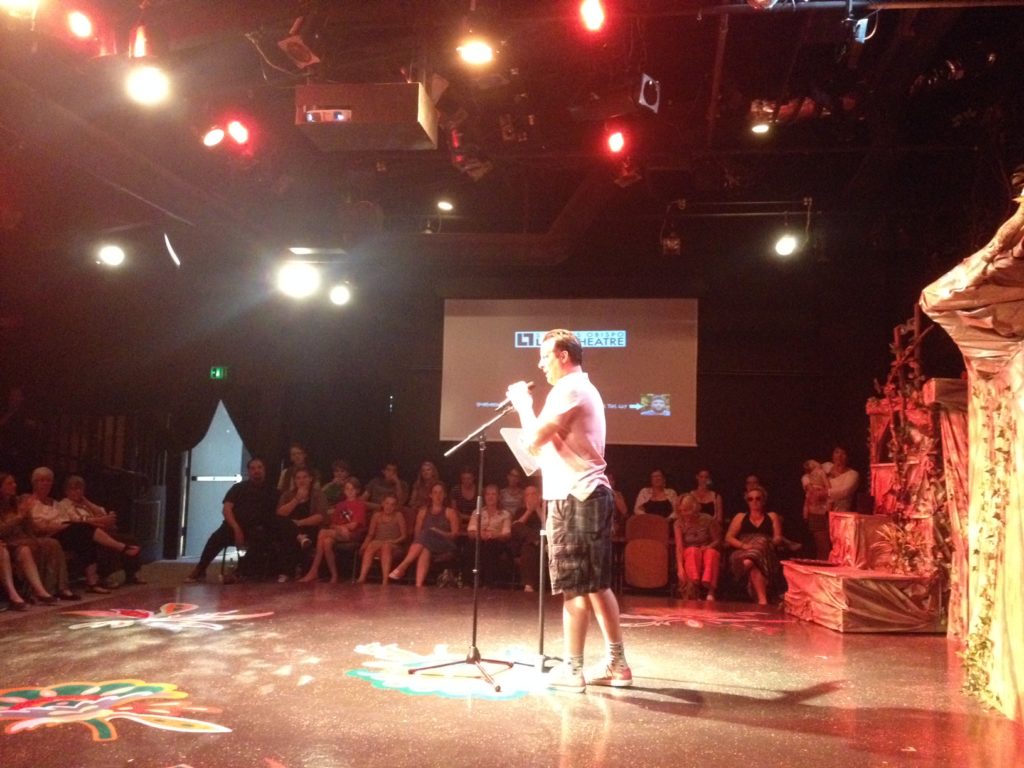 Our annual Open House BBQ & Volunteer Appreciation Party was held on Sunday evening here at the theatre and the lobby was filled with old friends, new friends and just a hundred or so of our over 350 dedicated volunteers. We enjoyed a delicious Santa Maria style BBQ together accompanied by fine wine from Broken Earth Winery then we all took our seats in the theatre, where Kevin Harris took the stage to thank our amazing volunteers and guide us on a video tour looking back at our incredible 2015-2016 Season and giving us a preview of what’s to come in our landmark 70th year. The entire event was generously sponsored by Ryan Loyd and RyLo Media Design. Ryan creates all of our lobby videos, our television commercials (check out our latest one!) and generally makes us look great  on the small screen each and every year. Thank Ryan!

To close our annual celebration, we took a few minutes to present some very special Volunteer Awards. These annual awards recognize contributions above and beyond the call of volunteer duty. In case you missed the festivities, here’s the lowdown on our award winners for this year. 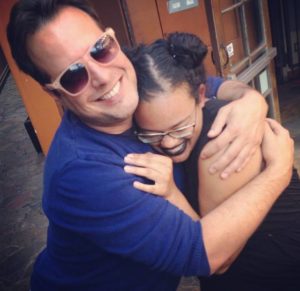 The Jim Chernoff Award is bestowed by the Board Of Directors for “outstanding technical contributions.” It is named after Jim Chernoff, otherwise known as “Mr. Technical,” who devoted years and thousands upon thousands of hours to the continued betterment of San Luis Obispo Little Theatre.  When we moved to the City Playhouse from the Hilltop Theatre, Jim did all of our technical installations, including our lighting and sound systems. Past awardees include John Battalino, Lester Wilson, Pam Hester and Lisa Langere, just to name a few.

This year’s honoree is Mariah Taylor, a dedicated backstage volunteer and stage manager. 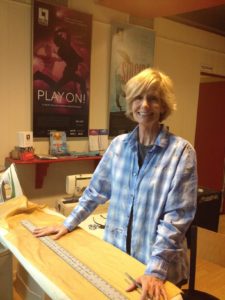 The Joy & Ralph Hanson Award is bestowed by the Board Of Directors for “the person who is always there for the Theatre.” It is named after Joy & Ralph Hanson, who were “always there” for San Luis Obispo Little Theatre for many, many years. Past awardees include Charlene Premer, Michelle Roberson, Arlene Sackman and Laura McNamara.

This year’s honoree is Janet Elder-Nichols who volunteers hours and hours of her time helping to build, paint and accessorize Dave Linfield’s gorgeous sets. 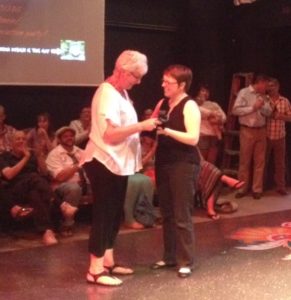 The Jessi Ray Spotlight Award is bestowed by the Board Of Directors for “overall excellence and outstanding contribution above and beyond the call of duty.” It is named after Jessie Ray, a longtime performer and supporter of San Luis Obispo Little Theatre. Past awardees include Elaine Fournier, Rebekah Oulton, Ryan Loyd, Lisa Woske and Dave Linfield.

This year’s honoree is Susan George, a dedicated box office and hospitality volunteer. 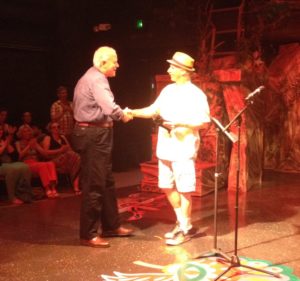 The John Grostick Rising Star Award is bestowed by the Board of Directors to a volunteer in their first year of service to the Little Theatre who demonstrates outstanding dedication and growth in the theatre. It is named in memory of John Grostick, who consistently went above and beyond the call of duty for the Little Theatre. The past recipients of the John Grostick award were Pam Hester, Franklin Mognett, Jamie Foster, Shaley Gunther and Jo Jackson.

This year’s honoree is our recently retired friend Greg Peters, who is spending his newly acquired free time helping Dave Linfield build sets AND who (along with his lovely wife Zandi Peters) will soon be tackling the job of culling, cataloging and computerizing our newly acquired inventory of over 5,000 costumes! 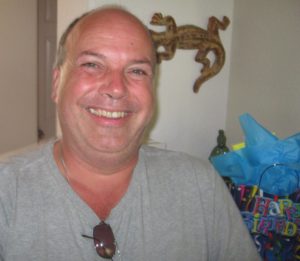 The Claire Gates Lifetime Achievement Award is bestowed by the Board Of Directors for many years of significant contributions to San Luis Obispo Little Theatre.  It is the highest honor, and, as such, has been bestowed upon a very select and deserving few. It is named after Claire Gates, the gracious and elegant grande dame of SLOLT.  Like Claire, the recipients of this award have clearly demonstrated their contribution, support, guidance, love and dedicated loyalty to and for SLOLT. Past recipients include Jim Chernoff, Wilda Rosene, Michael Siebrass and John Battalino.

This was our final award of the afternoon and was presented to Keith Wetzel for his years and years of amazing work designing and building costumes for dozens and dozens of shows on our stage. Thank you Keith!

And thank you to ALL of our incredible volunteers who help to make live theatre possible in San Luis Obispo year after year. Other volunteers who received special mention and thanks included Bobby Kendrick and John Mackey for updating our backstage monitors and upgrading the live video feed that plays in the lobby and backstage. Thanks guys!  Randal Sumabat was also called out for his incredible costume design work on several shows over the past couple of years, including the incredibly creative costumes for The Jungle Book KIDS (now playing!)  Franklin Mognett was noted for most hours worked, logging over 100 hours this year on hospitality duty. And Pam Hester continues to serve diligently and beautifully as our incredible stage manager for almost ALL of our Mainstage shows. What an amazing group. We love you all and we couldn’t do it without you!!

Don’t miss the final weekend of performances of Disney’s The Jungle Book KIDS!  This wonderful production featuring students in our Academy of Creative Theatre program is delighting audiences of all ages. Just five more shows and then it’s gone forever. Bring the whole family to enjoy this delightful musical featuring all of your favorite characters and songs from the classic Disney animated film.  Buy your tickets HERE before we are completely sold-out for the third straight weekend! (And you can check out more great Jamie Foster photos of the show HERE!.)

Finally, it’s not too late to buy your Season Tickets and guarantee yourself the BEST seats at the BEST price all year long – but you’d better hurry!  Individual performances to our six Mainstage Season Shows will go on sale August 2nd so buy your season subscription today to ensure your center section seats.  More and more of our shows are selling out even before opening night and center section seats go fast. Buy a season ticket today and don’t miss a moment of the magic of our 70th Anniversary Season!