This weekend’s Ubu’s Other Shoe Staged Reading of Max Frisch’s The Arsonists is going to make you laugh, make you think and give you something to talk about. Directed by Gregg Wolff and featuring  a cast of veteran actors (Tom Ammon, Debora Schwartz, Zandi Peters, Ed Cardoza, Tony Taylor, Jamie Foster, Jeff Zahn, Lynn Foster and Felicia Hall) this one, you do NOT want to miss.

“As a playwright I should consider I had done my duty if I succeeded in a play of mine in putting a question in such a way that from then on the members of the audience were unable to live without an answer. But it must be their answer, their own, which they can provide only in the framework of their own lives.” —Max Frisch 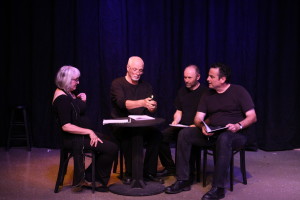 You have three chances to catch this funny and thought-provoking staged reading: Friday (tonight!) at 7 pm and Saturday at 2 pm and 7 pm.  As our dedicated Ubu’s Other Shoe fans know, our Staged Reading series is a unique opportunity to experience incredible plays that for one reason or another do not fit into our regular season. The Arsonists is a new translation of a 1953 play by Swiss playwright and novelist Max Frisch originally titled Biedermann und die Brandstifter. Alistair Beaton, a British political satirist, journalist and author, wrote the translation which was first produced by the Royal Court Theatre in 2007, and featured Benedict Cumberbatch. (Just had to throw that in because I love Benedict Cumberbatch!)

At tonight’s performance, there will be a talk-back after the reading with the director and cast, so I heartily recommend you get your tickets now and be there tonight for the full UBU experience. However, if tonight’s impossible, there are also tickets available for tomorrow’s 2 pm matinee or 7 pm evening performance. Tickets are only $12, so come on, live a little and come see a show this weekend! 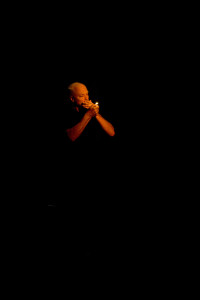 If you still need convincing, take a minute and read the full version of director Gregg Wolff’s insightful Director’s Notes below.  Then scroll back up, click HERE to buy your tickets, and I’ll see you at The Arsonists.

The Arsonists was originally written in 1953 as a satiric commentary on the West’s ambivalent attitude towards the takeover of Czechoslovakia by the Soviet Bloc after WWII. Even though it has been over 60 years, the themes are as relevant as ever. Whether it is Russia invading Ukraine, the advancement of ISIS, school shootings or the Syrian refugee crisis, we tend to observe these atrocities safely from a distance. They arouse our ire briefly, but quickly drift from consciousness once they are off the front page.

In 1948 the Swiss-born playwright, Max Frisch, visited Czechoslovakia during the aftermath of the Communist coup d’état and at a moment when major nations of the world appeared, once again, on the brink of war. For Frisch, who was born in 1911 and had thus spent much of his life surrounded by war, it was all too familiar; indeed, it had barely been three years since the end of World War II. As his journal suggests, the images Frisch encountered in Czechoslovakia profoundly impacted him. Puzzled by how cruel dictators are able to gain control over populations, Frisch wrote a creative narrative in which two arsonists infiltrate the home of an average citizen and deceive him into aiding them. This brief essay provided the skeleton for what later became Frisch’s 1953 radio play Die Biedermann und die Brandstifter or, as our adaptation would have it, The Arsonists. 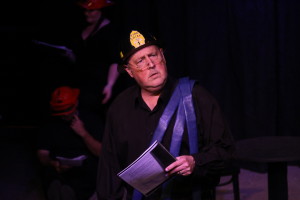 Yet despite the specificity of its original context, it is striking how relevant the play’s themes feel today. Beaton may have been inspired by events such as the July 7, 2005 London bombings and the increasing tension with the Islamic world, or it may have come from the growing divide between the upper and middle class (after all, the name “Biedermann” can be translated to mean “petty bourgeois.”) Regardless, the play’s theme of the weakness of personal ethics in the face of an unspecific “evil” still resonates with audiences today. Be it Occupy Wall Street, The War on Terror, or any number of other political issues in dispute currently, the ideas expressed in The Arsonists remain open to an infinite number of interpretations.

Theater remains a unique environment to tell stories that not only entertain, but can make us challenge our own beliefs. Only live theater gives both the audience, and the actors, the opportunity to explore and share those “moments” together. I hope this performance provides you your own special “moment”.  –Gregg Wolff