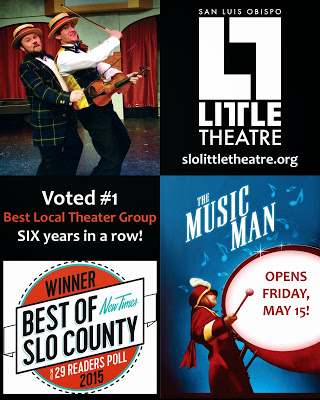 The annual New Times Best Of poll results are in and you’ve done it again! Thank YOU for voting us the BEST LOCAL THEATER GROUP for six years running!  In the words of New Times outgoing Arts Editor Jessica Pena:

“SLO Little Theatre isn’t just a place to see plays in San Luis Obispo. It’s an institution. Since 1947, it’s been a consistent source of quality theatre, running more shows than any other theater group on the Central Coast. ‘The staff and board of the Little Theatre feel that it’s our responsibility to produce the widest variety of theatre possible,’ said Kevin Harris, Managing Artistic Director. And that’s no lie. This year alone, the Little Theatre has produced a beloved musical, a contemporary drama, and a daring one-woman show. It may be ‘little’ in name, but not in ambition.”

Thank you New Times readers and Little Theatre fans! We promise we’ll keep doing our best to bring the magic of live theatre to downtown San Luis Obispo this year, and for many years to come. Speaking of which… 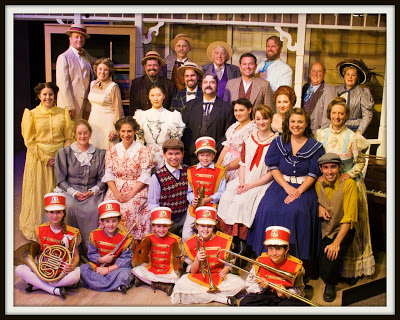 Here it comes. The season finale musical for our 2014-2015 Season. THE MUSIC MAN! Director Zach Johnson, Music Director Lacey McNamara, an incredible production staff and crew and this talented cast of 28 local actors have been working hard for almost two months putting this fabulous show together and it’s almost here. This Tony Award winning musical (five Tonys, including Best Musical!) opens this Friday night and you’ll kick yourself if you miss it! But if you’re going to see it, you’d better hurry, there are less than 200 seats remaining for sale in the entire five-week run! So, what are you waiting for? Click HERE to get your tickets today!  (Hint: Thursday nights are probably your best bet for the best seats and you can also try our waiting lists at the door!) 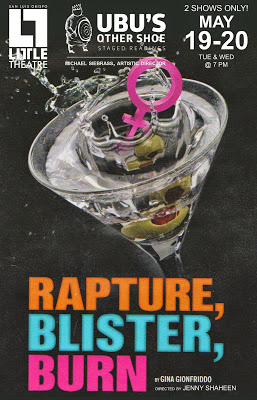 Tuesday and Wednesday nights may not seem like the usual time to consider going to see a play, but when you’ve got an amazing staged reading like RAPTURE, BLISTER, BURN playing, it’s not only a good idea, it’s absolutely the best idea I’ve heard in a long time. Number 8 in our 2014/15 Season of Ubu’s Other Shoe Staged Readings is a contemporary comedy by Gina Gionfriddo.  RAPTURE, BLISTER, BURN tackles feminism’s foibles in what The New York Times called an, “intensely smart and immensely funny,” new play. Director Jenny Shaheen and her talented cast of five local actors will bring Gionfriddo’s comedy to life in a staged reading Tuesday, May 19 and Wednesday, May 20 at 7 pm. The price is just $10 and there will be an audience talk-back after Tuesday night’s performance. Click HERE for your tickets!

Our final After Hours @slotheatre late night comedy show of the 2014/15 Season will hit the Little Theatre stage on May 29th. We are thrilled to present actress and comedienne Jill Turnbow in her one-woman show BETWEEN IRAQ AND A HARD PLACE. In hilarious and heartwarming detail, the show details Jill’s experiences as a stand-up comic entertaining the troops during the Persian Gulf War of 1991. Imagine a huge cruise ship moored in the Persian Gulf, brought there to offer “R&R” for troops in the region. Then imagine a young, female, stand-up comic, 27,000 men and an open bar. The result? In Jill’s own words: “I had a pretty good time.”  We promise you will too. There will be six shows only running Fridays and Saturdays at 9:30 pm and Sundays at 7 pm. I’d recommend you get your tickets NOW to ensure your seats. And you can do that right HERE.

We’re heading into an exciting opening weekend!  Hope to see you at THE MUSIC MAN!