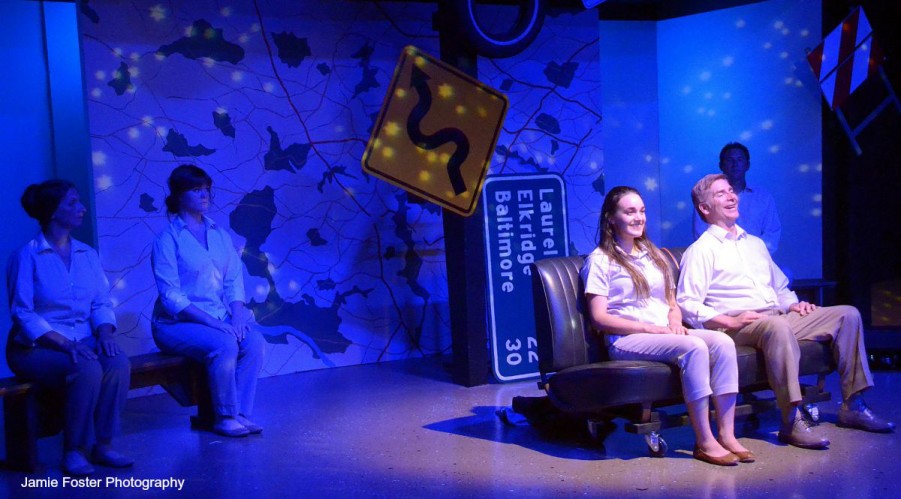 “There’s something about driving—when you’re in control of the car, just you and the machine and the road—that nobody can take from you. A power.”
-Uncle Peck in How I Learned to Drive

This weekend, the Little Theatre will present Paula Vogel’s 1998 Pulitzer Prize winning play, How I Learned to Drive. As directed by Ron Clark, the show is amazing and runs like a “well-oiled machine.” I caught a rehearsal last night and was riveted throughout the 75 minute show (there will be no intermission.) Erin Parsons as Li’l Bit and Don Stewart as Uncle Peck bring heart, humor and humanity to the two complicated central characters. The 3-person “Greek Chorus,” featuring Bobby Kendrick, Valerie Pallai and Stephanie Spencer, bring multiple roles to life as the story jumps from one year to the next, from the early 1960’s through the 70’s and beyond. The set, by David Linfield, is a wonderfully imagined vision of highway caution signs, a map of Maryland, car parts and a bench seat on wheels. 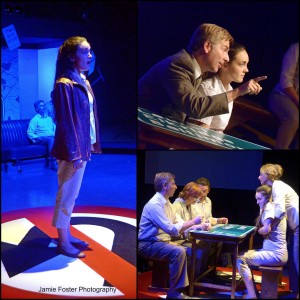 “Nothing is going to happen until you want it to.”
– Uncle Peck
“Someone is going to get hurt.”
– Li’l Bit

Make no mistake about it, this is a play for mature audiences only. It goes from hilarious to heartbreaking, sometimes in a matter of minutes. This multiple award-winning drama examines some very thorny questions with no simple answers. In short, it’ll be the talk of the town for the next three weeks. Don’t bring your kids, but do bring yourself to How I Learned to Drive, running September 25-October 11. 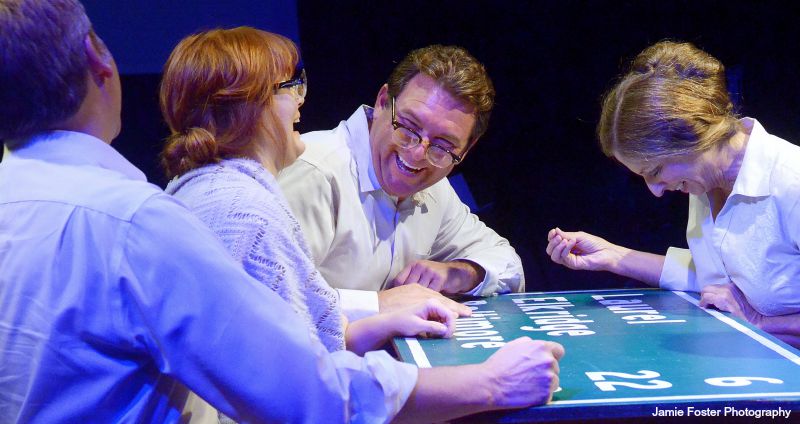 You can read more about the show in last week’s blog entry OR check out this New Times preview story by Hayley Thomas.  Get your tickets today or better yet, guarantee your seats at ALL five remaining mainstage season shows by purchasing a 5-Show Season Subscription. We promise we’ll find you the best seats, at the best price all year long.

Many thanks to Rosh Wright and Tom Ammon & Gary Lawson for generously sponsoring this show so that we can share it with all of you. 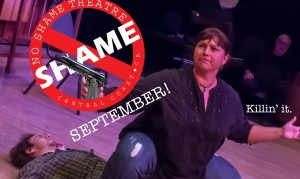 Speaking of “hilarious” and “complicated”, it’s time once again for No Shame Theatre! This once-a-month late night series of wild and wacky original theatre has been part of the Little Theatre line-up for over five years now. If you haven’t experienced it yet, then you need to get out of the house and check it out. No Shame September is this Friday, September 25. Lobby opens at 9:30 pm, we’ll take your original submissions at 10 pm and the show starts at 10:30 pm. Thanks so much to RyLo Media Design for sponsoring No Shame all year long! 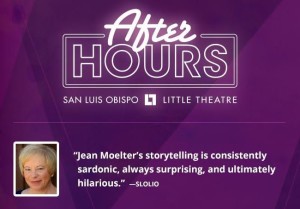 Finally, it’s time to mark your calendars for the premiere of our second season of After Hours late night comedy with Holy Crap! opening next Friday, October 2nd at 9:3o pm!  We’re going to kick-off October and the “supernatural season” with true tales of harrowing Halloweens and growing up Catholic, written and performed by hilarious storyteller Jean Moelter, and directed by Jill Turnbow. Jean is a regular at the monthly SLOlio gatherings at Linnaea’s Café and at our very own No Shame Theatre. Buy your tickets NOW for our late night comedy premiere and take advantage of an “early bird” discount price of just $15 each or subscribe to all four After Hours comedies, including The Santaland Diaries, My First Time and Oreos & Percodan for just $60!

After Hours is sponsored by Films for Good and Christine & Bob Williams.